Over 30 years as an Educator and Spiritual Guide

A scientist by training, Dolores holds an M.Sc. in Biochemistry and initially worked as a lecturer in Biochemistry, sharing her passion and understanding of life itself at a molecular level. A trip to America brought Dolores into contact with a community of profound and pioneering, creative thinkers who paved a way to spark her life‘s work. In 1983, she met the radical Dominican priest, Matthew Fox and was inspired to 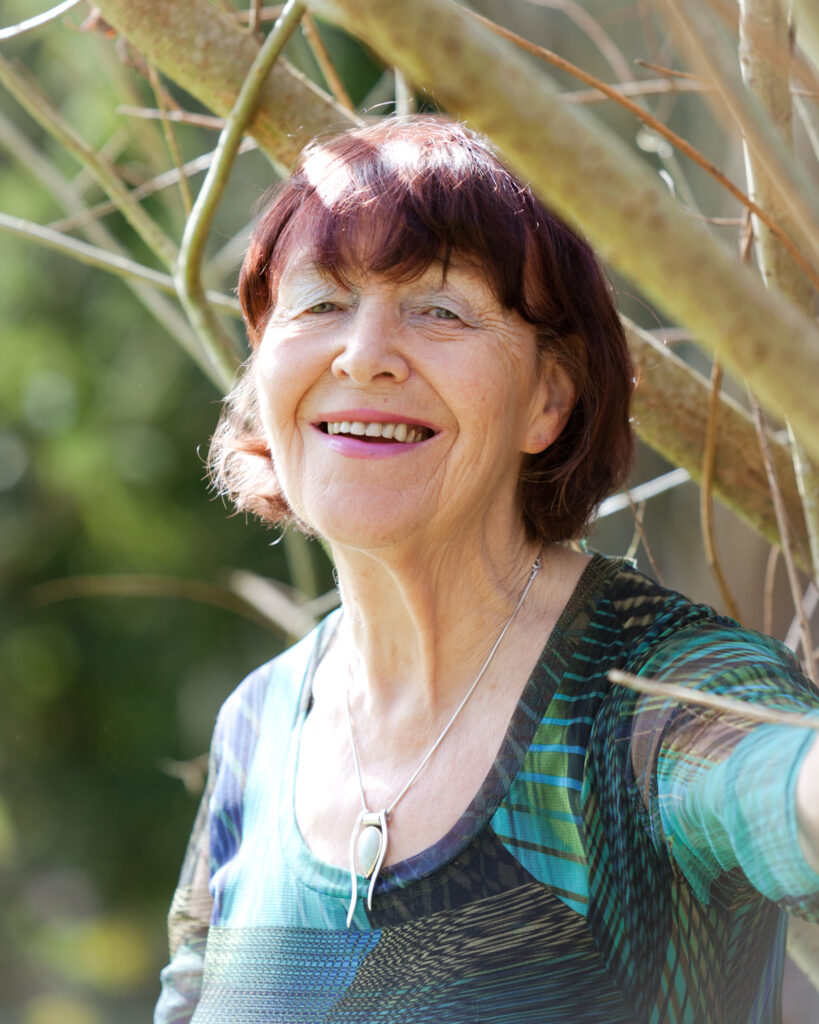 enrol on his Master’s degree in Spirituality, based in California. This experience of radical spiritual awakening changed her life and sparked a passion and purpose that she has shared ever since.

Both Dolores and her work have been influenced by the many amazing teachers she encountered and studied with in California in the mid 1980’s. These include leading creative thinkers: Matthew Fox, Jean Houston, Brian Swimme, Joanna Macy, Thomas Berry, Alexandra Kovats and Starhawk. She experienced many different forms of education including training in Psychosynthesis in San Francisco and different types of body work at the McKinnon Institute Oakland. These experiences awakened many new aspects within her. Since she loved what she discovered, she was more alive and passionate about life and it‘s possibilities than ever before. Her studies with Creation Cantered Spirituality and Native American Spirituality in California eventually led Dolores on a journey of rediscovery of her own spiritual roots which led  her into the  ancient spiritual traditions  of Ireland.

She wanted to share all of these treasures with other people.

She returned to Ireland from sunny California in 1985 to see what might be possible. It was a big culture shock. Why Stay? Why not go back to California and her tribe? Yet some part of her knew that since she was able to open up to such possibilities, so too could other people.

Dolores passionately believes in the hidden potential present in every individual and through her work supports the evocation of this possibility .

This quotation held the essence of what Dolores dreamed of for herself and for others who were willing to let go of the need for certainty and take the road less travelled.

How to bring that dream into reality was the question? Like all good questions, it has taken years for the answer to unfold.

She created Iomlanu …Educational resources for creative living which offered courses in different aspects of personal and spiritual, development courses that held the potential to awaken people to fuller richer life!

Looking back over the journey since that time, Dolores discovered that there is no real path, except the one that we create for ourselves, by taking one step at a time without knowing exactly where it will lead.

For over 30 years she has served as an educator and spiritual guide. In this work, her focus is on “Educare“, a Latin word which means “to draw out from within“.

Dolores has written two books, Your Breaking Point (1993) and Ever Ancient, Ever New – Celtic Spirituality for the 21st Century (expanded second edition 2011),

She is a contributor to Celtic Threads (1999) The Quite Quarter Anthology (2009) and Of Constant Heart (2010). Brigit Sun of Womanhood 2013 Dolores co created a beautiful highly illustrated, perpetual Celtic calendar with the wonderful American artist, the late Cynthia Matyi , in 2011 which has been re printed many times since then and has been sold all over the world

In 1986, Dolores founded the “Iomlánú Centre for Healing and Creative Living” in one room in her home in Dundalk. The word Iomlánú is derived from the Irish word “Iomlán which means “to be whole”. The work focused on enabling people to find the place of wholeness within and to live from more that place of inner wholeness.

This approach has never let me down, and it has made all the difference in my life.”

Rekindling the Flame of Brigid Goddess and Celtic Christian Saint

Since 2000, Dolores has focused much of her time and energy in recovering the ancient spiritual traditions of Ireland as they evolved over many millennia and the importance of this ancient wisdom as the basis for a healthy society This has included the recovery the ancient Divine Feminine wisdom and the wisdom of Brigid, a pre-Christian Goddess and Celtic Christian saint.

In 2008/2009 Dolores together with Maura Lennon, the late Fr. Tom Hamill, and Mairead Heaney founded “Brat Bhride“ (“Brigit‘s Cloak“) to celebrate Brigid at Imbolc. This became the Brigid of Faughart Festival in 2010. This festival has grown in stature and influence over the years, gathering the wisdom of Brigid, pre-Christian goddess, Celtic Christian saint and wise woman of the 21st century. Celebrating Brigid has allowed this wisdom to be shared within the wider community and created a whole new awareness of this archetypal energy and the importance of reclaiming and integrating this energy into our daily and communal lives. For details, see www.brigidoffaughart.ie.

In 2012, Dolores and Karen Ward began the research that resulted in the reopening of a pilgrim path from Faughart (Brigid’s birthplace birthplace to Kildare her monastic city). The first pilgrimage took place in July 2013 and has taken place each year until 2019 details on www.brigidsway.ie.

Dolores Whelan through her work within the Celtic and pre Celtic traditions has brought many people into contact with the deep spiritual values of the earlier inhabitants of Ireland who lived in close contact with the natural world  in all its many manifestations and the culture that developed from this connection in their lives. Dolores believes that the Celtic way of living can be of major value to the lives of people living now.

Over many years she has shared the ancient mystery of our Celtic Goddesses, the spirituality of our ancestors and the wisdom of the Celtic way of living on the planet. She shared the tools and rituals that helped many of us to transform our way of being to a happier and contented life.

Her teaching and were always done with much fun and joy. She is a great spiritual guide and friend.

Dolores Whelan is one of the foremost champions of Irish mythological heritage. She has been an incredible proponent of the ancient Celtic calendar and celebrating the indigenous festivals of the year.
Dolores has also been a tireless promoter of the ancient deity and Christian saint, Brigid. She is a scholar of our ancient past who cares deeply about how that past is integrated into a frenetic and sometimes chaotic modern era.
I am blessed to count her among my close friends.
Anthony

Dolores holds a time portal window, through which we can look back to ancient ways and through that reflection, look to both the present and the future.

Dolores talks of the learning from the inherent rhythm and patterns of nature and human nature. This helps make sense of the world we live in today and reimagine a future for global and personal harmony

Dolores Whelan is one of Ireland’s greatest wisdom teachers and a powerful bridge between the ancient traditions and a new, more empowered and integrated way to live, lead and be – both for us as individuals and as a global humanity.

Her book “Ever Ancient Ever New” is my absolute Go-To for inspiration and connection to ancient wisdom and how to navigate the seasons of the year that the indigenous people of this land lived by from a place of connected right relationship, sovereign power and harmony.  It offers us a blueprint, a coding and deep wisdom to create a new and enduring society.

Dolores is a powerful future ancestor whose legacy is already unfolding through the many lives she has touched and inspired across the world through her work and presence.

Founder of The Celtic Leader - Be The Best You Can Be

Dolores Whelan has been cherished friend and a much-valued mentor for over 30 years.

Dolores and I first met in 1988 during a “native American” gathering in County Sligo.

This provided us both with the impetus to delve more deeply into our own indigenous wisdom tradition, an undertaking Dolores had already begun to make a central part of her life’s work. Dolores understanding of much of our native teachings in relation to landscape, mythology, music, culture and community has placed her in a unique position to translate what remains vital and relevant of the old ways into a language that meets the sensibilities of the 21st century.

This skill has been woven into her very successful book, Ever Ancient, Ever New

I consider Dolores to be an Elder of this Land and one of its trusted Wisdom Keepers.

I bow to her unwavering commitment to guiding others to notice what is alive around them, in their own backyard.

Sign up to Dolores Whelan's newsletter to get exclusive insights and information on events.

We use cookies on our website to give you the most relevant experience by remembering your preferences and repeat visits. By clicking “Accept All”, you consent to the use of ALL the cookies. However, you may visit "Cookie Settings" to provide a controlled consent.
Cookie SettingsReject AllAccept All
Manage consent

This website uses cookies to improve your experience while you navigate through the website. Out of these, the cookies that are categorized as necessary are stored on your browser as they are essential for the working of basic functionalities of the website. We also use third-party cookies that help us analyze and understand how you use this website. These cookies will be stored in your browser only with your consent. You also have the option to opt-out of these cookies. But opting out of some of these cookies may affect your browsing experience.
Necessary Always Enabled
Necessary cookies are absolutely essential for the website to function properly. These cookies ensure basic functionalities and security features of the website, anonymously.
Functional
Functional cookies help to perform certain functionalities like sharing the content of the website on social media platforms, collect feedbacks, and other third-party features.
Performance
Performance cookies are used to understand and analyze the key performance indexes of the website which helps in delivering a better user experience for the visitors.
Analytics
Analytical cookies are used to understand how visitors interact with the website. These cookies help provide information on metrics the number of visitors, bounce rate, traffic source, etc.
Advertisement
Advertisement cookies are used to provide visitors with relevant ads and marketing campaigns. These cookies track visitors across websites and collect information to provide customized ads.
Others
Other uncategorized cookies are those that are being analyzed and have not been classified into a category as yet.
SAVE & ACCEPT